Exploring Toronto by bicycle and foot. 20k on Mondays. 20k on Fridays. In TorontoOntario (TO)

Hi and welcome to this record of 20k bike rides and walks through Toronto, Ontario over the year 2020.

I am Lee, founder and coach at WoW Power Walking. Since 2000, I’ve been coaching walkers to be the best they can be all while enjoying fresh air and camaraderie. Back in 2019 I was conjuring ways to celebrate this year I turn 60 (20×3), 2020, and the 20 years I have been coaching walking workouts. As part of this celebration I want to celebrate my love of riding the bicycle as a form of transportation and the city in which I live. Toronto, Ontario, Canada is a city of neighbourhoods, global cultures living side by side, and wondrous ravines and green space. Over the years I have walked much of the city. Still, I know there is so much more to see, smell, feel, walk, and bike. This is the year I follow more than my well-worn routes. I welcome companions. Here you will find notes and photos from my adventure through one of the world’s greatest multicultural cities.

Here we go. Let’s begin at the heart of the city: Nathan Phillips Square. This is the public space sitting in front of Toronto City Hall, home of one of Toronto’s most popular winter skating rinks and the  “3D TORONTO sign” that is making its way to icon status since its arrival for the 2015 PanAm Games. For anyone reading this who may want to know, Nathan Phillips was Toronto’s mayor between 1955  and 1962 and the new city hall and public space were opened in 1965.

My plan is to use Toronto’s Bike Share bicycles for the 20k Monday rides — at least through the winter. This allows me to stay warm on public transit making my way from my home in the west end of the city to the start point. I realize it’s going to be somewhat of a logistic challenge. A bike can be unlocked at any BikeShare station that has a bike docked in it (sometimes there are empty docks only and no bikes). Standing beside a bike locked at the station located at the south west corner of Nathan Phillips Square, I open the “Transit” app on my phone and request to “Unlock a Bike”. A 5-number code shows up and I punch it in a keypad on the bike docking station. The bike unlocks and I am ready to begin the first of my 20k bike rides for Project 2020TO! I pull the bike out of the dock. Because I have to re-dock the bike within 30 minutes, I set a timer on my phone for 22 minutes and start cycling westbound on Queen Street.

Today I intend to ride a spiral clockwise from Nathan Phillips Square through the downtown core. Earbuds connected to my phone allow me to hear the timer go off at 22 minutes. When it chimes, I stop my bike, pull out my phone, check in with the “Transit” app again to determine where I can find a Bike Share station with an empty docking station within a 5-minute bike ride. Fortunately, today, every time I need one, there is a station, with an available dock, within 5 minutes of cycling. I dock the bike, wait a moment and then request another code to unlock the bike again. I could take any of the bikes but I choose the one that I had already set the seat for my leg length.

When the two tracking apps I am using, Strava and MapMyRide, reveal that I have cycled 20k I find myself at the end of the spiral at Yonge and Wellesley Streets. It seems fitting that I should complete my first ride at Yonge Street — the construction of Yonge Street was, according to wikipedia, an event of national historic interest to Canada and it has long been one of Toronto’s most important arterial roads. It’s extension, known as Highway 11, ends at the border to Minnesota, USA!

On Friday, I will walk the cycle route. I am curious how the experience will differ. 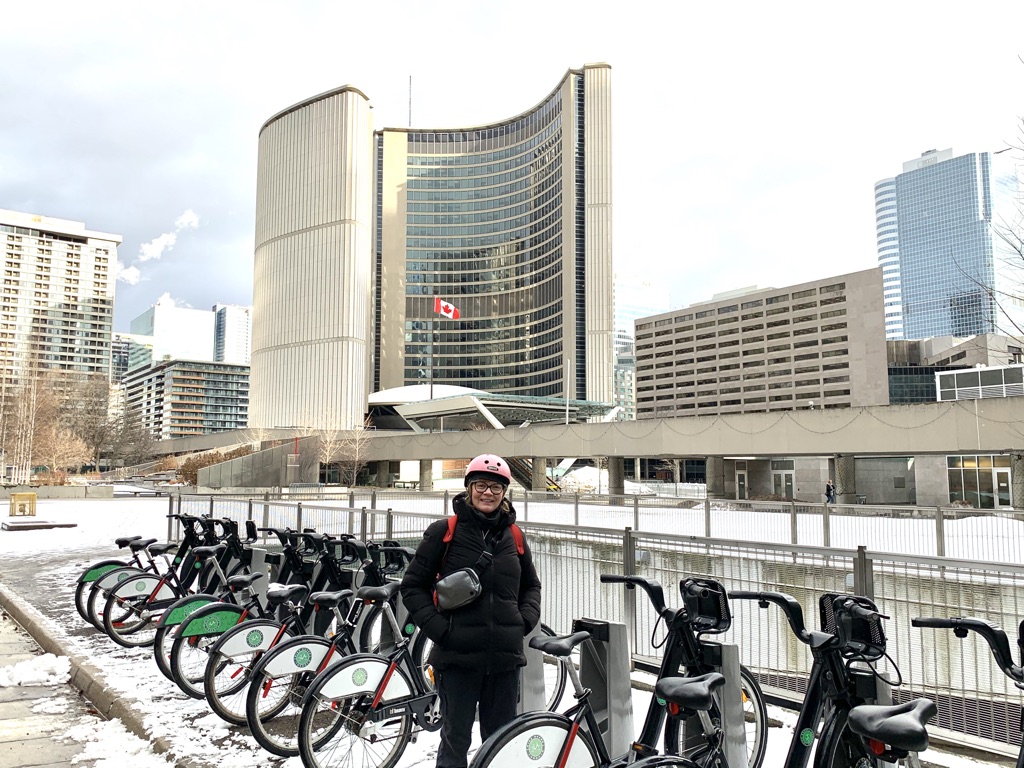 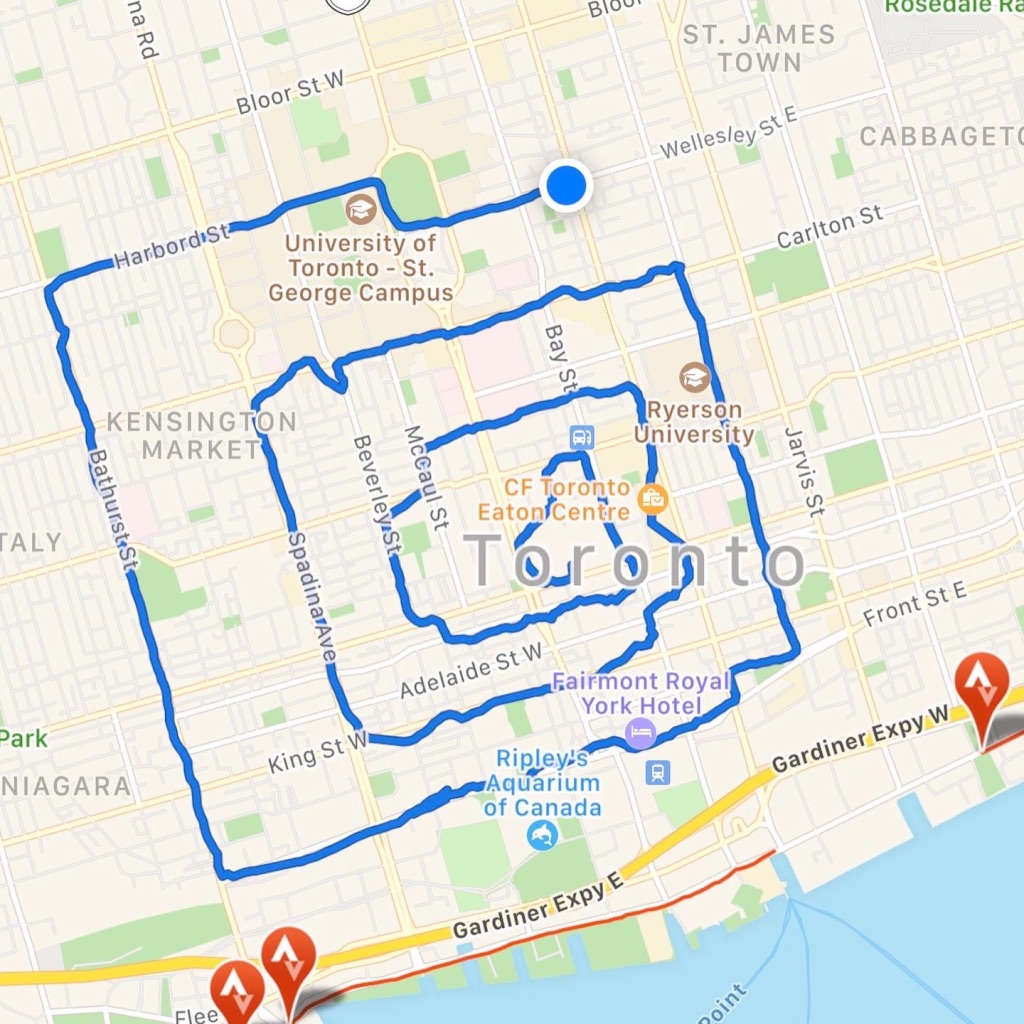