Walking the half in Columbus, Ohio 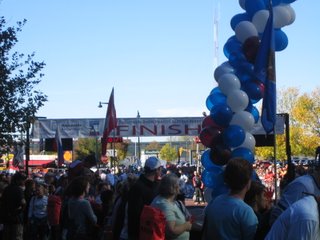 Oh, glorious fall days for walking! I do hope you didn’t miss getting out for a walk today.

I am returned home from Columbus, Ohio after an exhilarating half marathon walk through the finer neighborhoods of this American mid-west university town. The event has walking divisions in the half and full marathon.

Under a black sky filled with bright stars and half moon, 1300 walkers waited with excitement, and perhaps a little anxiety, for the 7am start of the Columbus Marathon. Runners started one hour later. We were sent off with as much fanfare as any running start. There was plenty of energizing music, a powerful rendition of the Star Spangled Banner while everyone stood facing the State Capitol Building, and pacing police cars to lead the way once the gun was fired.

Volunteers were out at the very first water station which was within the first mile and half of the start. Some of the bands were still setting up but despite that there were cheerleaders already on the route and music to be heard. Granted my version of the event is going to be different from others but I do hope what I write gives you a taste of the event. Because I was one of the lead walkers, for virtually the entire route between 2 miles and 11 miles I walked on my own. Up until 2 miles there were some other walkers with me. After 11 miles a handful of runners had caught up from their 8am start and were passing me. I wasn’t alone because the water stations were plentiful and each of these had several dozen volunteers who were all vocal in their cheering. There was a police officer at almost every turn in the route. They were excellent at keeping cars out of the way, but sometimes a little slow on giving me directions! A couple of times I almost took a wrong turn. A few miles into the race I realized that there were blue and white arrows spray-painted on the road. As a half marathon participant, I was meant to follow the blue arrows. Even later in the race, I realized that no arrows at a corner meant just go straight! I had been slowing down on a few corners trying to figure out if I was supposed to turn. It took a while to figure out the system, and it might have been nice to read about this in the race directions. But there it is, for you to know should make the trip to Columbus! And, of course, if you were walking a little further back in a larger group, the route may have been more obvious.

The first few miles of the course took us out along Broad Street which is somewhat commercial. But at this point it was dark and all of my focus was on warming up appropriately. By the time the sun was lightening up the sky, I was walking the course that passed by upscale Columbus homes that had rooms and lawns to spare. Most important there was foliage. It’s interesting how a little foliage has a disproportionately large calming effect. And, it’s amazing what a little sun can do to illuminate the gold and red leaves of autumn foliage.

By 6 miles the course was taking me back to the area of the city where we had started. This part of the route was straightforward and not terribly scenic compared to what I had just passed through but, again, cheerleaders and water stations were plentiful. And, there was a terrific surprise waiting once I got to the next turn. At almost 10 miles into the race, there was a huge crowd lining the streets. Spectators from the start of the running division must have made the trek a few blocks south to this position on the race course. Because I was still alone on the course, it felt like thousands of people were out cheering me on! I’d love to know if other walkers had a similar experience, but my guess is that they would have because it would still be another 20 to 30 minutes until the first runners would come through.

Floating on the high of such overwhelming enthusiasm, I found myself walking past historic old German Town. The cheerleaders had thinned out but the quaint houses and shops were still a feast for the eyes. Walking by one particularly charming pastry shop I asked the Sunday morning coffee gang sitting at the tables if I should return for my post-race recovery caffeine. Their wholehearted endorsement had me stopping by on my way out of Columbus later that afternoon. If you go to Columbus Marathon, be sure to go the Pistacia Vera on South 3rd Street. In fact, don’t worry about the marathon; just go to enjoy the best traditional Parisian macaroons outside of continental Europe and an espresso! (It’s all about the snacks and caffeine, don’t ya know?!)

Now I had a reason to walk faster toward that finish line! After passing by a lovely park at the south end of the German Village, the rest of the route went north on High Street past the regal State government buildings and other commericial highrises. At this time, lead runners were starting to pass me. I always enjoy seeing these athletes flash by.

Soon I was turning toward the finish at the Nationwide Arena. The architecture of this arena is remarkable and it is surrounded by wide sidewalks and grassy areas. Once again, crowd support was overwhelming in the final hundred feet of the race and the post-race snacks were plentiful. I particularly enjoyed the sample of Clif Builders Bar which I had never tried before. It has high protein content and high quality ingredients. I may have to find more of those!

As far as how the organizers managed a walking division: unfortunately, I can’t offer too many insights. Obviously, it was great to have separate registration and start. I did not see any guidelines for walkers and I suspect there were lots of walking participants running portions of the race but it would be impossible to discern that once the pack of runners caught up. The bib numbers were identifiable but the bibs themselves were not a different colour. Still for a walker, this has to be one of the best races I’ve entered. I always appreciate separate registration and acknowledgement that the walking gait needs separate result postings and rankings from the running gait.

Also, this past weekend, we had a few people walk the full marathon in Detroit. I hope some of them will add a post here so that we can learn about their experience.

Get up to date news on upcoming classes, new video additions, and retreats.